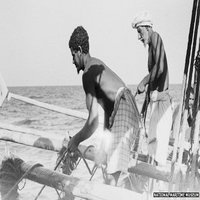 The History of Arabian Pearls

The pearl beds in the Persian gulf are among the oldest and most prolific ever known. Individual pearls have been found that date back to at least 7,000 years ago. Pearls were traded extensively in Roman times and the Arab writer, Al Idrisi states that in 1154, Julfar, in Ra’s Al- Khaimah, was already a major pearling centre. By the beginning of the 20th century it was estimated that over 1200 pearling boats operated out of the Trucialj States.

There was huge demand for Arabian pearls in the late 1800s and the Arabian pearl market was worth a staggering £10 million at the beginning of the 1900s. However, the new cultured pearl market and the discovery of oil destroyed pearling the the Arabian gulf and from the 1950s it was all but destroyed. These pearls are sold as Basra pearls now, mostly from the pinctada radiata from Bahrain. Persian Gulf pearls range in colour from white to dark cream and tend to have a yellowish tint.

Oldest Pearl in the World

The oldest natural pearl in the world was unearthed by French researchers at a Neolithic site in Arabia in 2012. Discovered in the United Arab Emirates the pearl was beloved to have originated from between 5547 to 5235 BC. The pearl measures 0.07 inches in diameter.

The Revival of Arabian Pearls

Now Arabian Pearl Holdings, a new brand based in Dubai, is trying to revive the mystique of the Arabian Pearl. At its farm in Ras Al-Khaimah, an Emirate about 80 miles north of Dubai, the company cultures pearls with silvery and champagne hues inside the Pinctada Radiata oyster. The company has partnered with several leading designers and will include a tassel style design from Stephen Webster made with 18 carat white gold, black and white diamonds, emeralds and Tahitian and Arabian pearls.

How To Join Reasons To Join Code of Ethics Consumer Confidence